If you haven’t read the Pre-1985 FRT5 article, I suggest you do so before continuing on in order to understand some lingo I mention here (but it’s not totally necessary).

Something important to note is that the “FRT-5” name to label the whale tail style Floyds eventually gets named the “FRT” at some point with using 100, 200, and 300 names after it (e.g. FRT-100) to identify the color.

From here on out, the FRT-5 Schaller-Germany Floyd Rose, often called the “original” Floyd Rose (and eventually labeled simply the “FRT” in catalogs), went through varying but virtually unnoticeable changes from 1985-2020.  That being said, when given a closer look, there are ways to identify them.  Sustain blocks are a good way of identifying FRT5 time frames.

If anyone knows the exact dates of these FRT-5 variations discussed, please contact me. 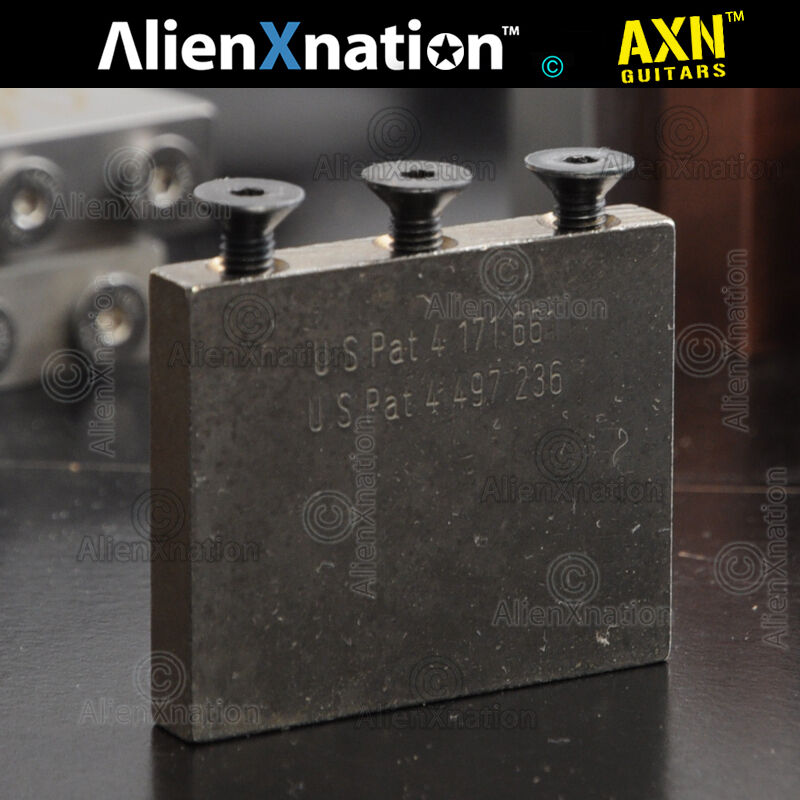 The patent number would stay on the sustain block all the way until the mid-2010s. 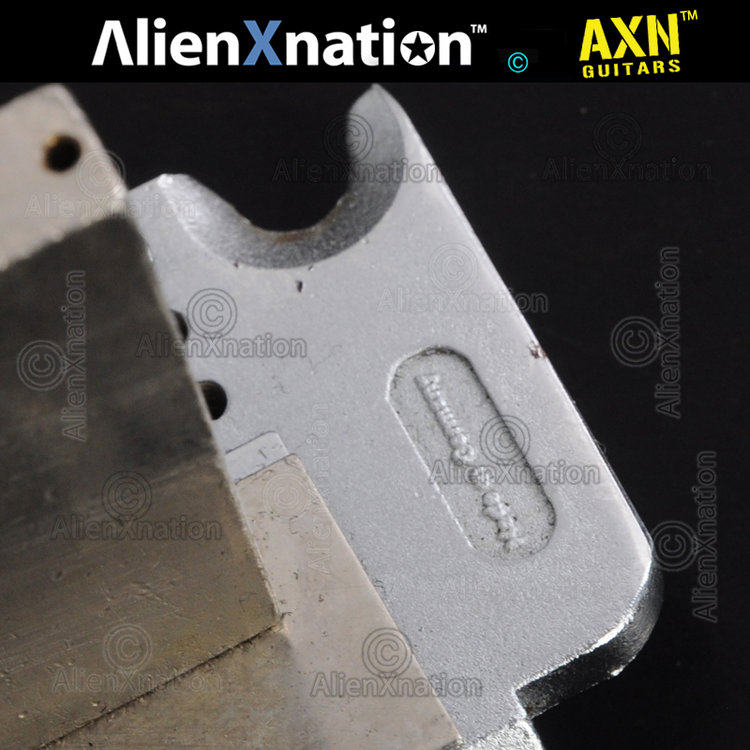 The famous “Made in Germany” stamp is something still shown on original Floyds in 2020 and one way to distinguish an authentic Floyd Rose. 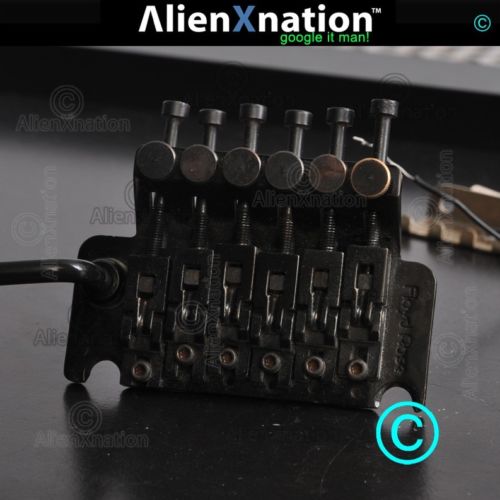 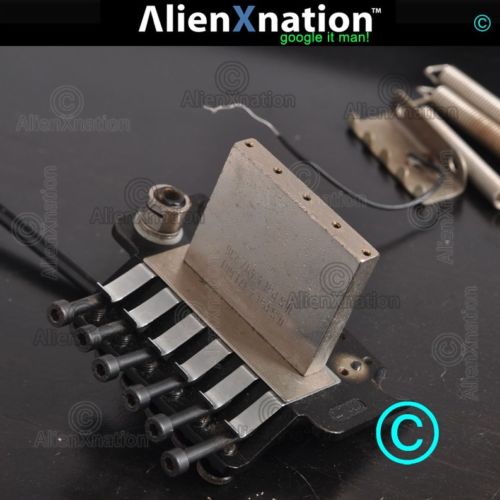 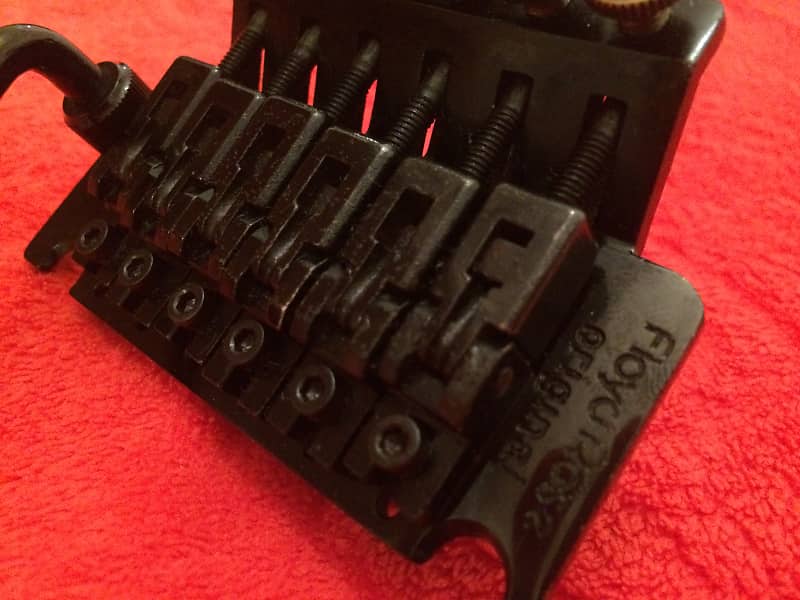 On this version of the original German made FRT-5, it literally said “original” on the top part of the base plate.  It is unknown when when this style started and ended, but it may have been in the early 1990s when Fender acquired distribution rights when Kramer Guitars shut down. 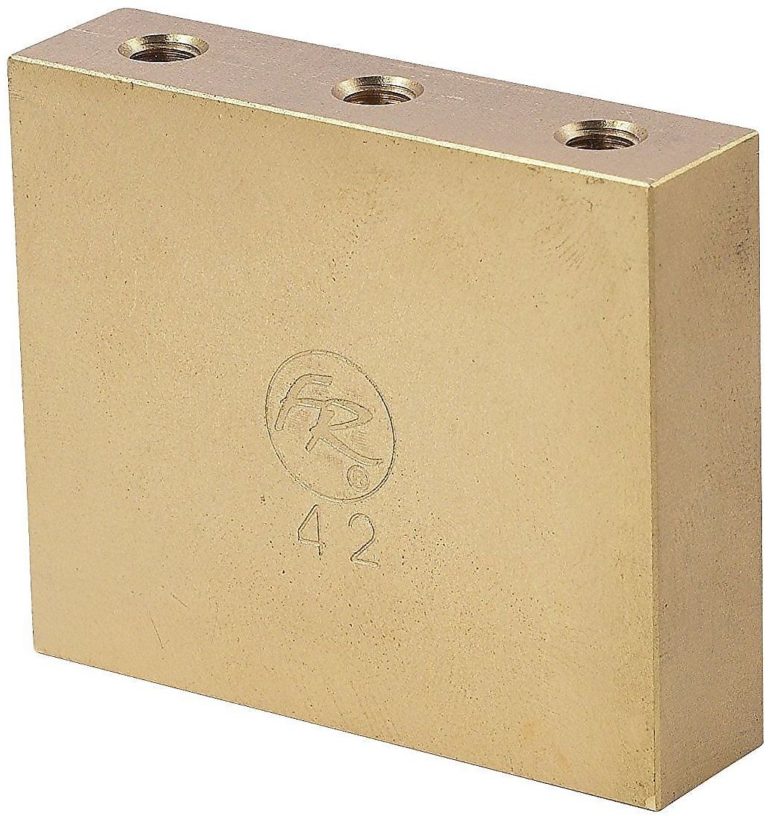 The Floyd Rose logo changed sometime after 2010, I think, to the “FR” symbol you see today.  Above, you see a brass sustain block with the logo. 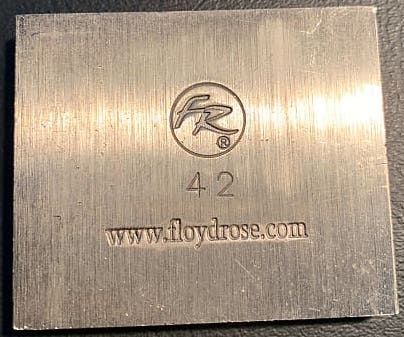 Above is another variation with “www.floydrose.com” on the sustain block.  Floyd Rose also started selling upgrades to their tremolos. 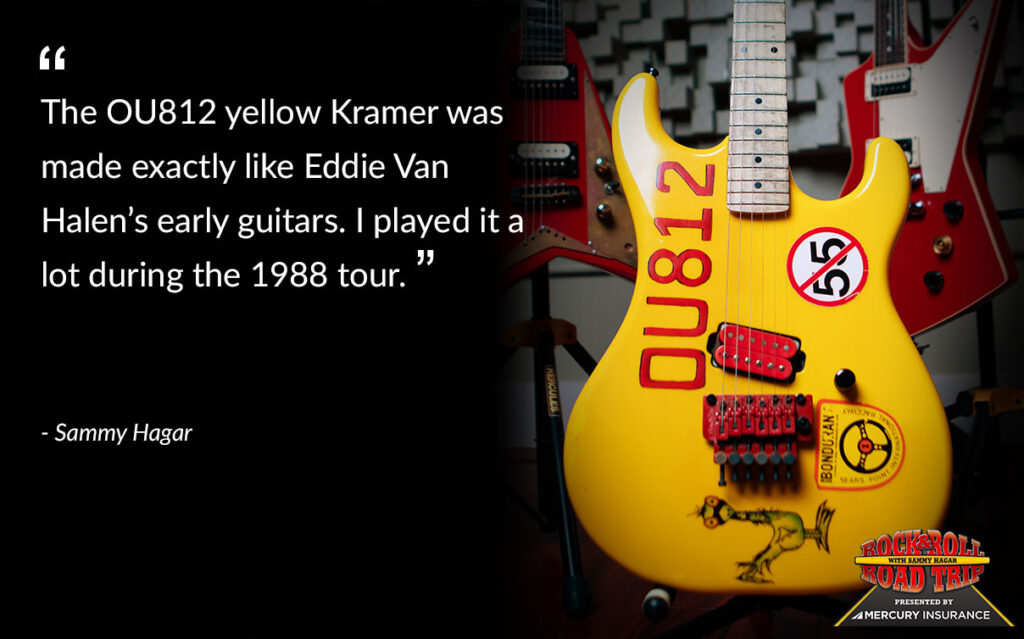 Powder-coated color Floyds may have been offered in the mid-1980s to some artists and others as custom orders.  Eddie Van Halen supposedly has a white colored Floyd with gold hardware, much like some Hamer guitars have during the same era.  Above is Sammy Hagar’s yellow OU812 guitar with a red colored German Floyd.

It’s rumored that Helmut Schaller was worried about making some of these powder-coated Floyds because it was against Mr. Rose’s approval depending on who it was made for. 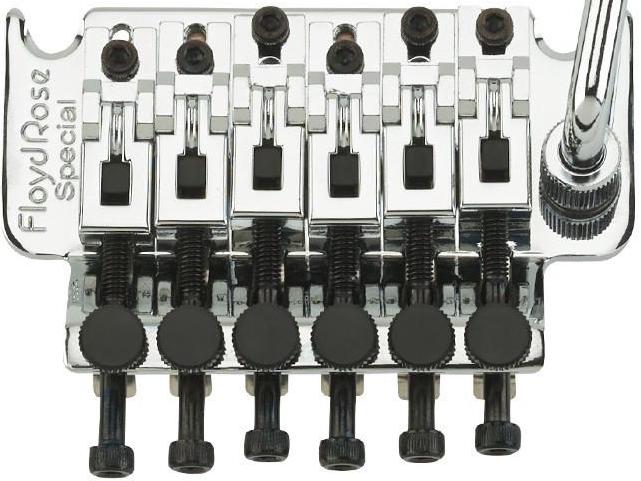 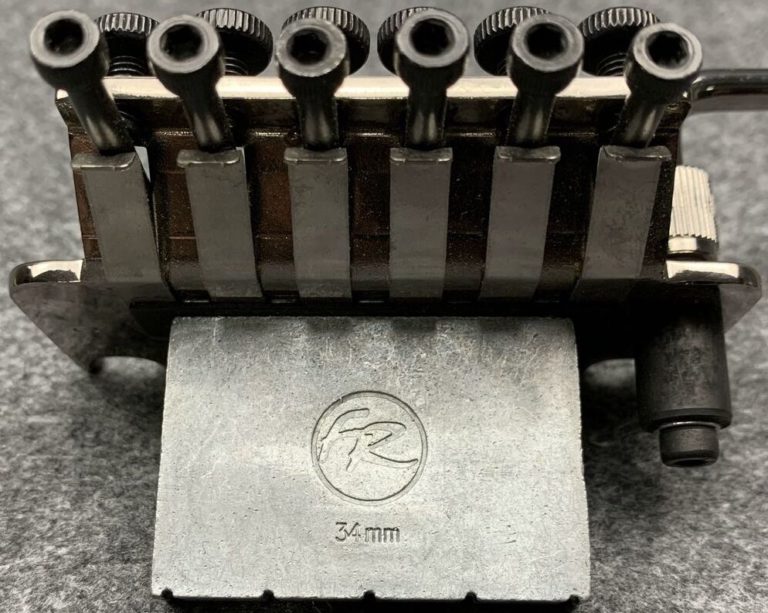 Above you see the cheaper zinc alloy sustain block on a Floyd Rose Special.   Also notice there is no “Made in Germany” stamp on the base plate.

The FRT-1000 is a high quality Korean built Floyd Rose that is only allowed to be put on newly built guitars and not sold separately.  I’ve heard these are the same or close to the same quality as the German made originals.

These ones look identical to a German Floyd but lack the “Made in Germany” stamp at the bottom of the base plate. 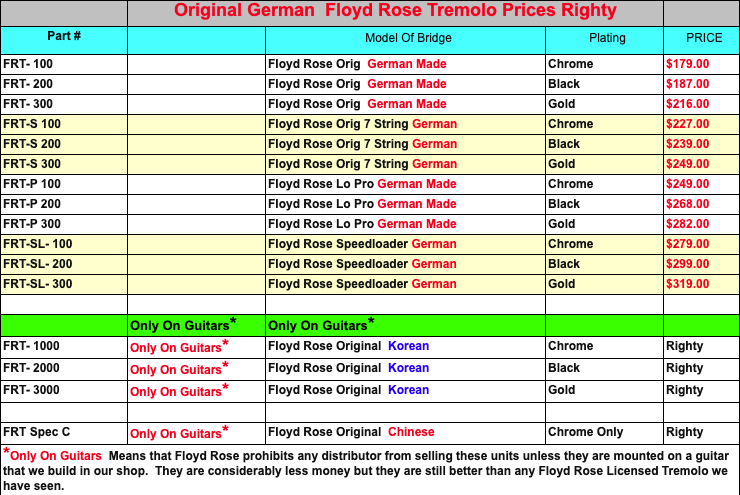 Above is a price list from Ed Roman’s website where he briefly mentions the FRT-1000 near the end.  Also note that the “FRT” is the same as the German FRT5 whale tail.  They use numbers to label the color.  For example, FRT-200, means a black German made Floyd.

This can all get confusing, which I’m still calling the original Floyd Rose design the FRT5 or “whale tail” as originally called in 1983.

Interesting off-topic note:  The Prototype FRT-4 from 1982 was rumored to be called the “FR-1000″ in 1982/1983.  I didn’t even bother to mention that in the article since most people coming here would already be scratching their heads by that point.  But if you made it this far, now you know. 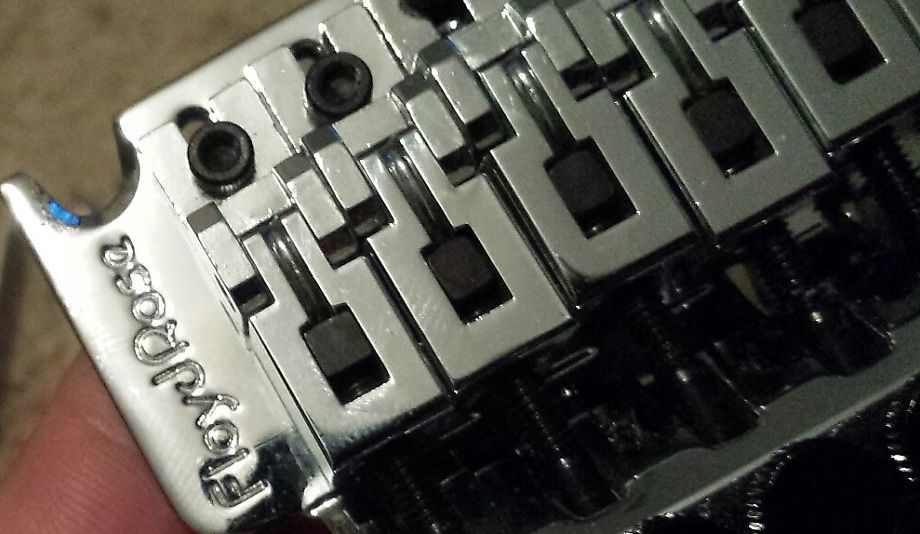 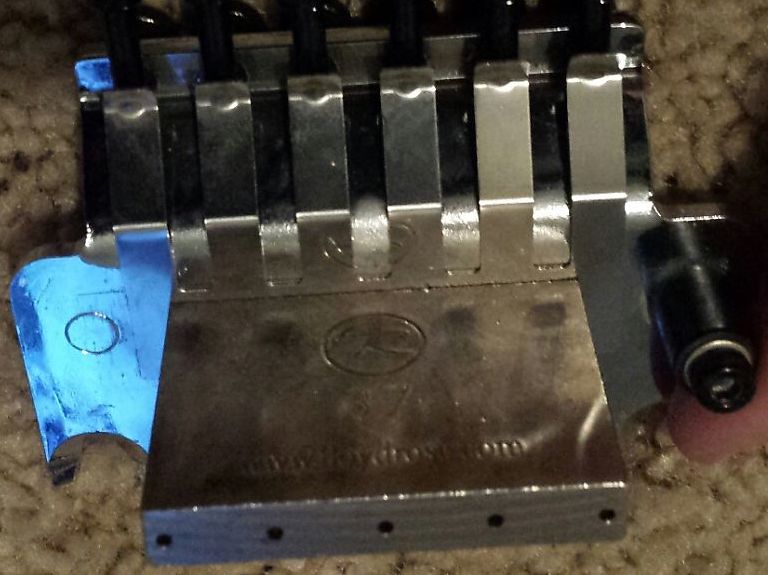 The FRT-1000 looks identical to a modern German made version.  However, as seen on the right photo, there is no “Made in Germany” stamp, which means this is a Korean FRT-1000 made only for guitar builders and not sold separately.  Of course, you will find them for sale in the used market at times. 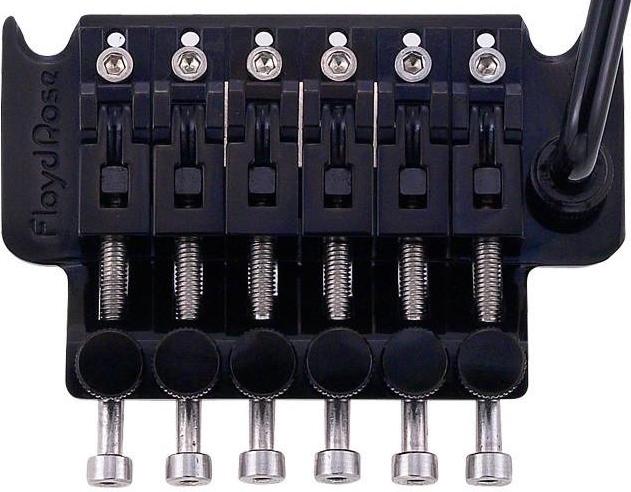 Today, you can buy a “Hot Rod” Floyd Rose which is essentially an upgraded version of the original Floyd Rose.  The Hot Rod Series Tremolo kit comes with a stock 37 mm Fat Brass Block and stainless steel screws. 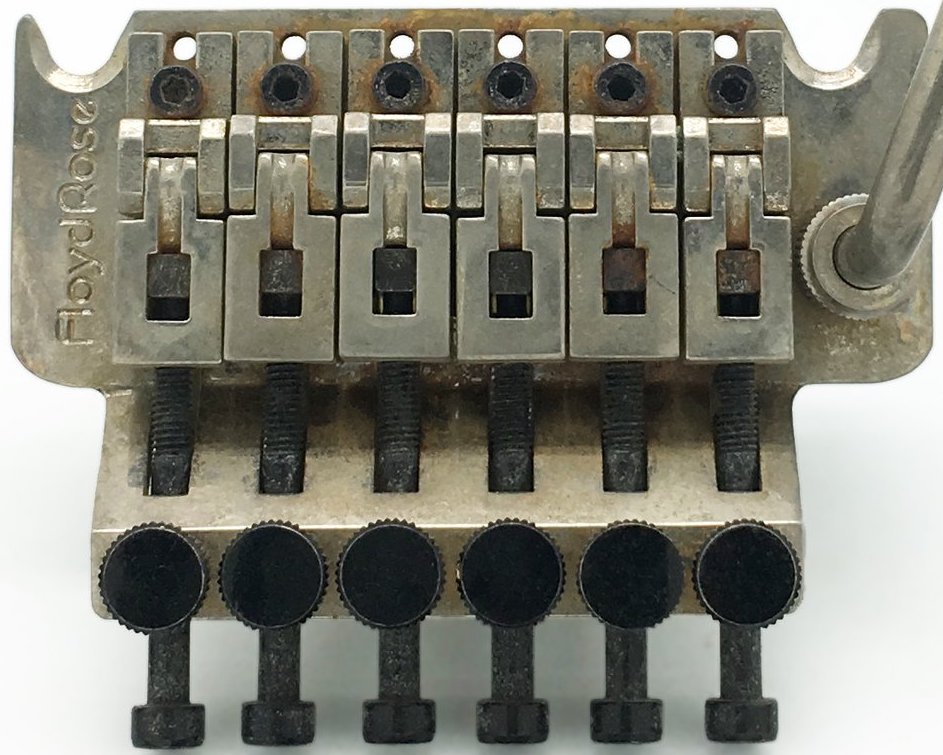 With the rising popularity of guitar relicing in the 2010s, Floyd Rose decided to make a reliced original tremolo that has been given a muriatic acid treatment.  Otherwise, it’s the same as the typical original Floyd. 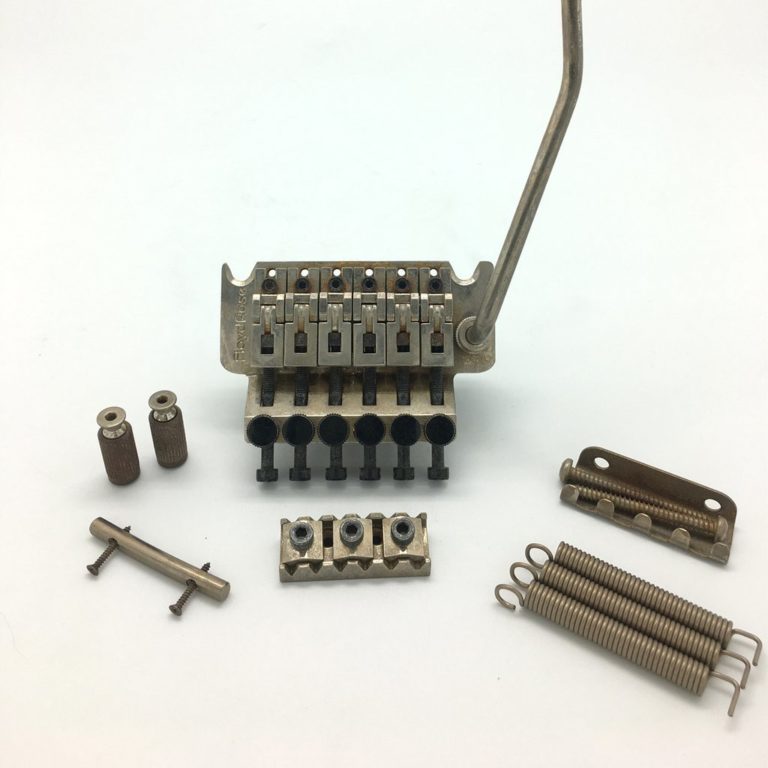 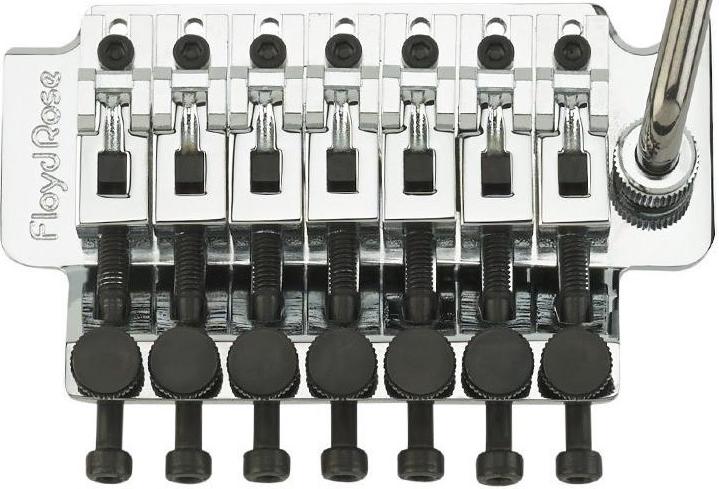 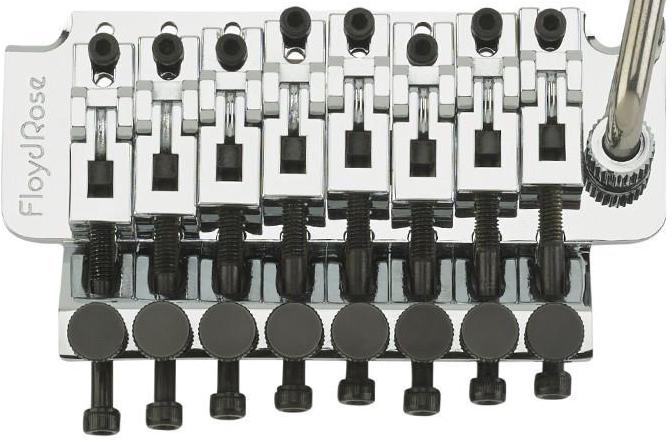 Seven-string guitars grew more popular in the late-1990s and eventually sparked a version of the Floyd Rose.  Afterwards, an 8-string version would follow, which is quite a sight to be seen (above, right). 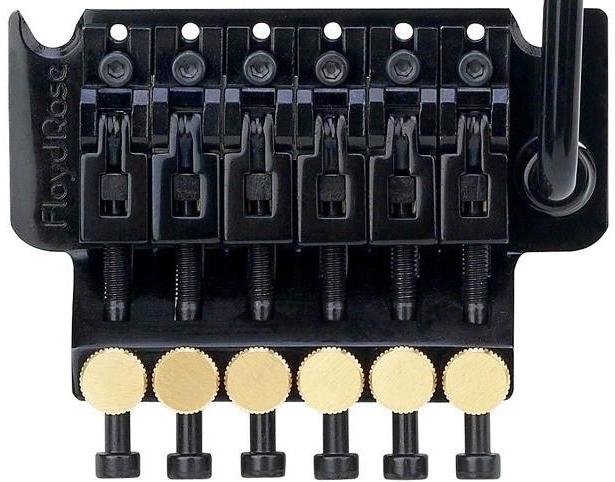 Taken from the original design specs of 1984, Floyd Rose put together the “1984” reissue sometime in the late 2010s.  The bridge features the brass fine tuners, old style trem bar housing, bridge mounting wood screws, and a fat solid brass block (which is actually far bigger than the actual model from 1984). 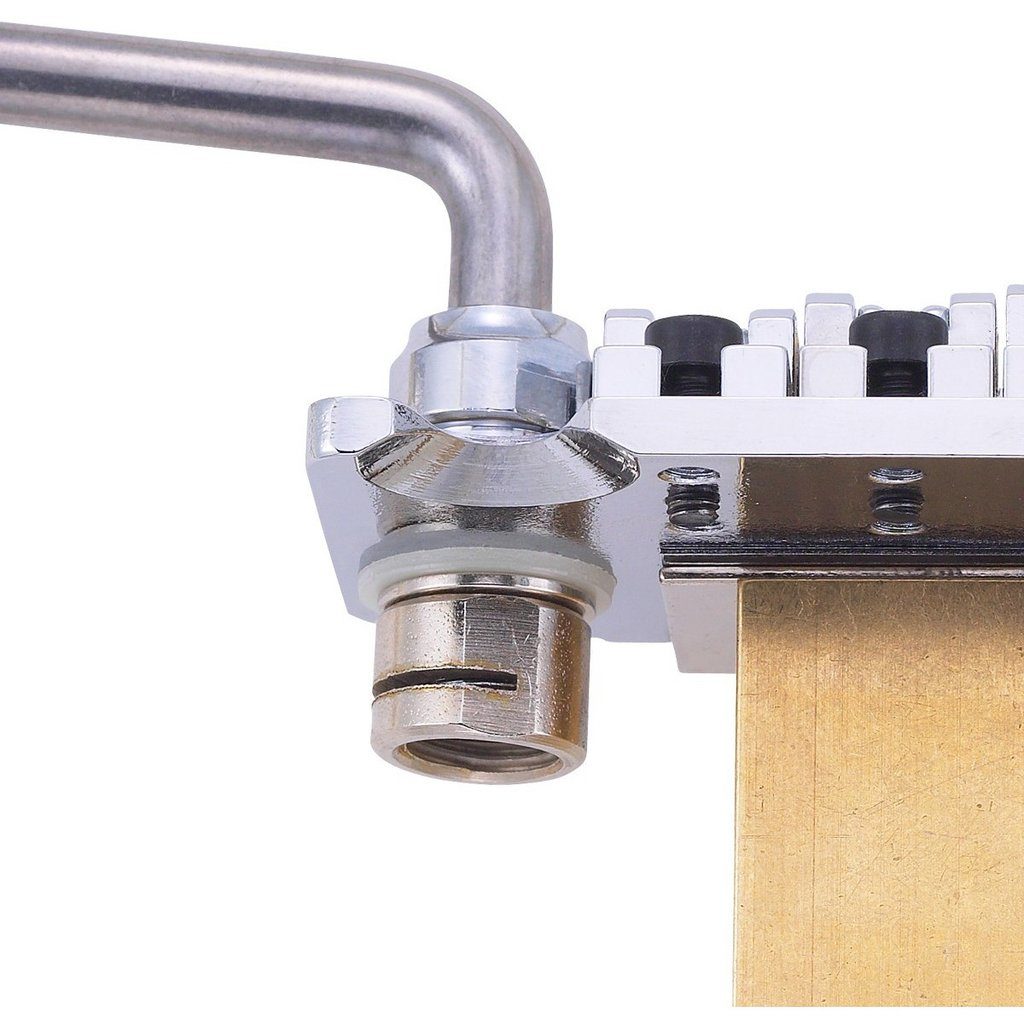 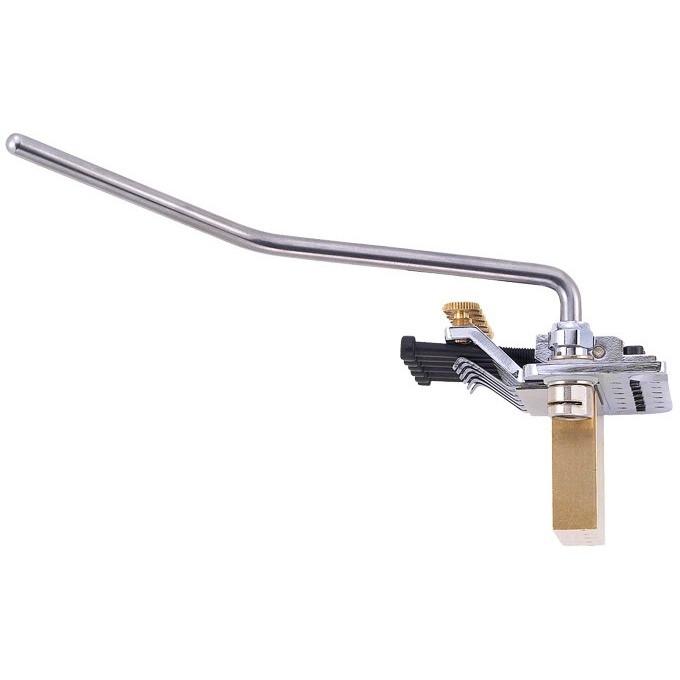 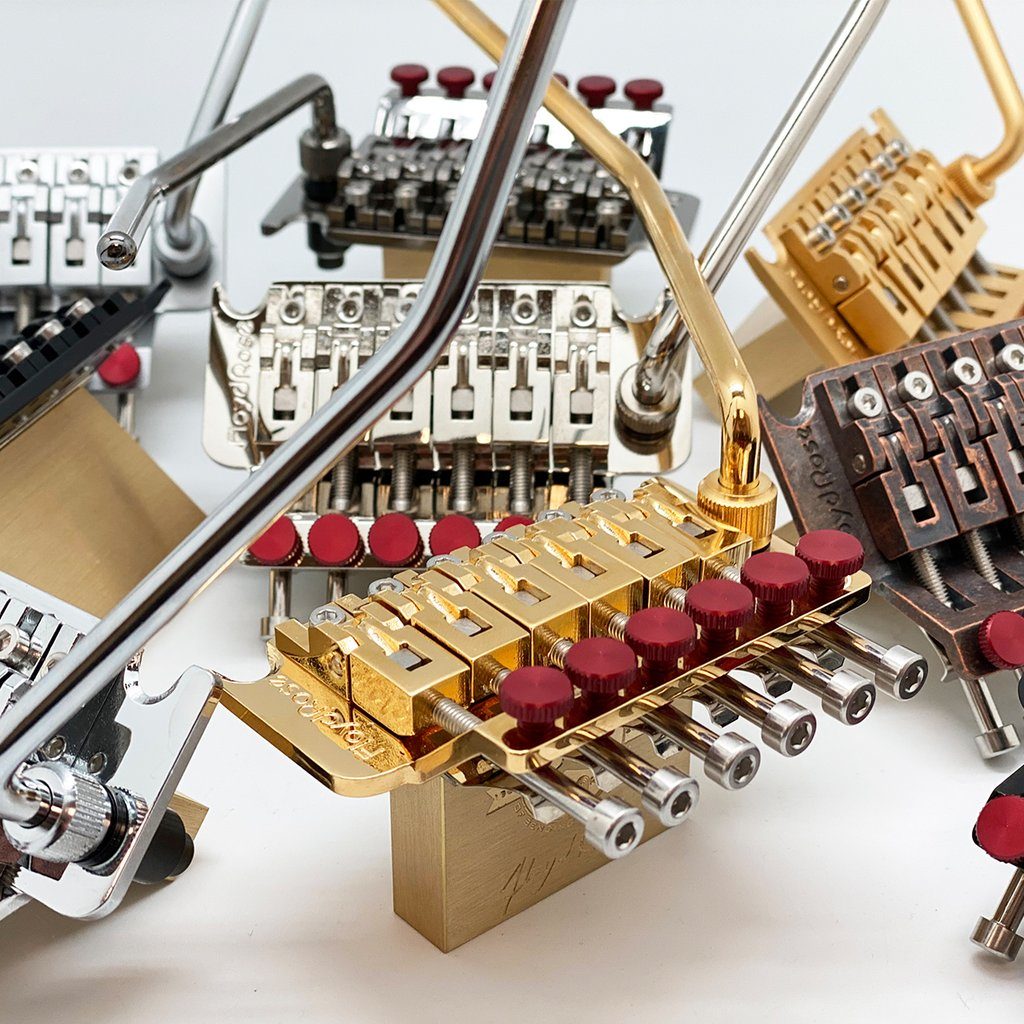 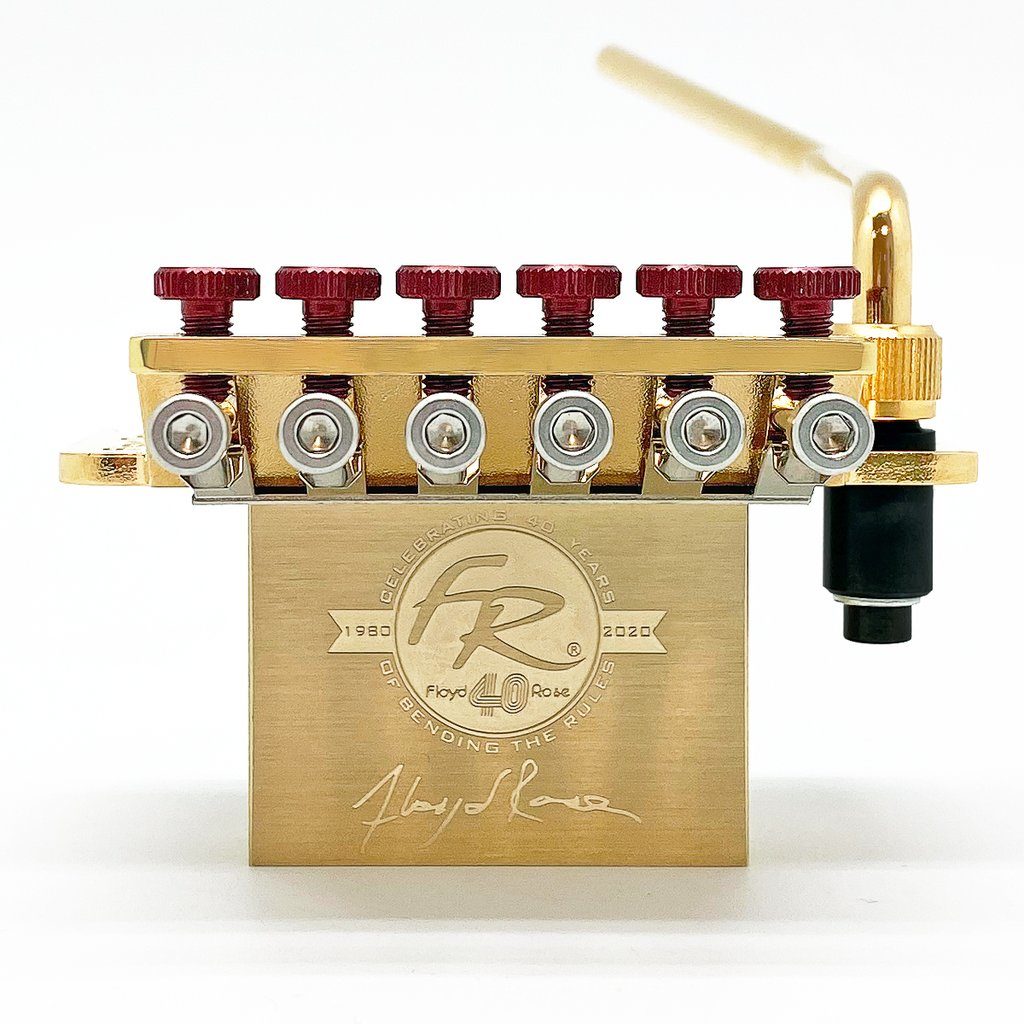 Above is the unique sustain block seen on the 40th anniversary editions. 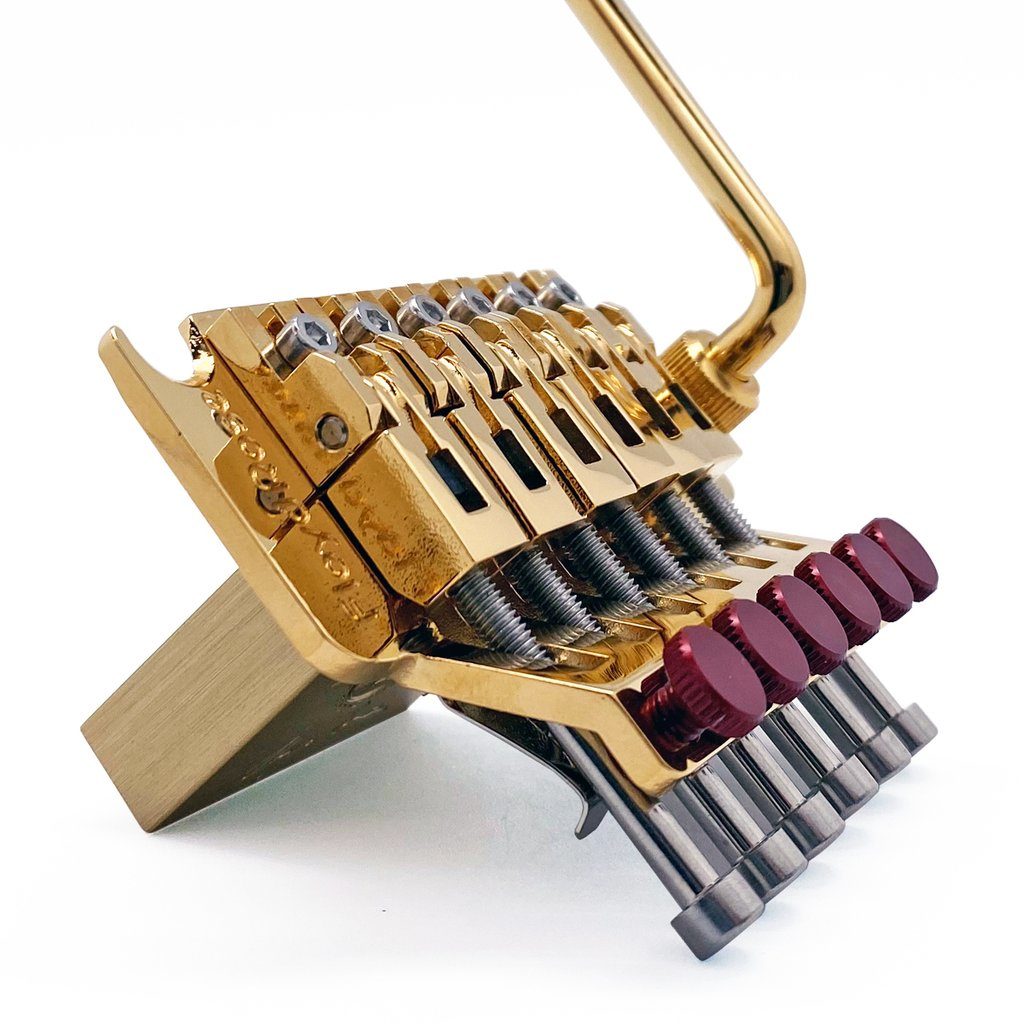 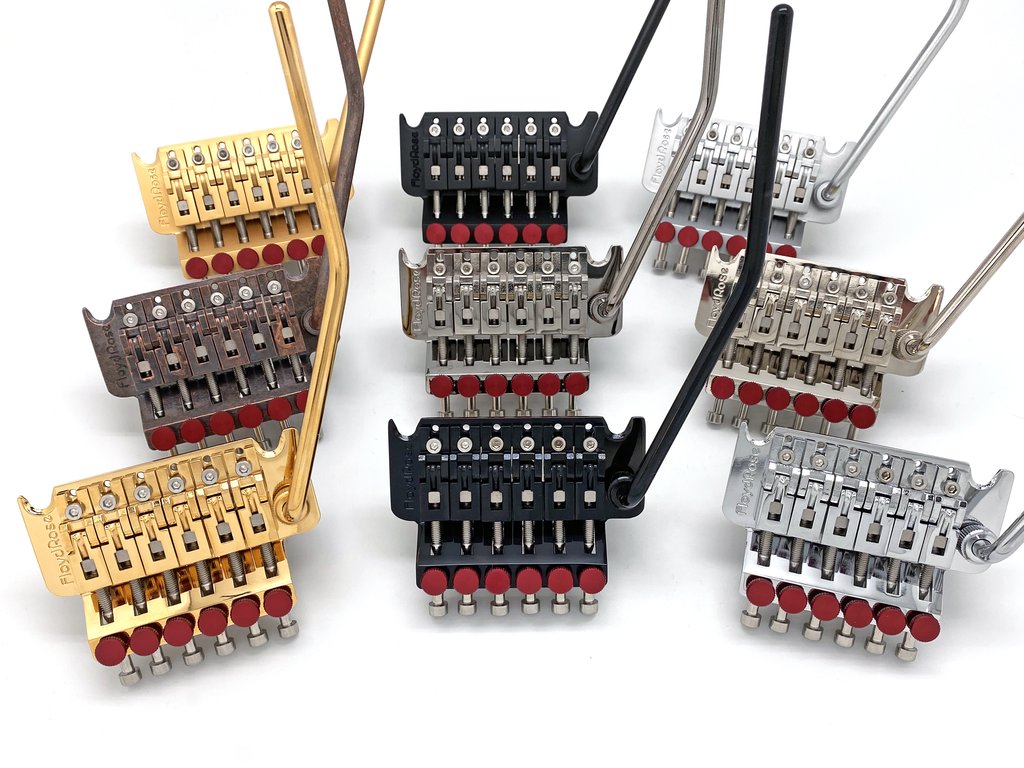 Above are the color options available.