The ESP Mighty Vise is a mysterious FRT-3 style variant only seen in the 1983 ESP Export Catalog.

This model was short-lived, and there are theories that the ESP Mighty Vise may have been a result of a highly experimental prototype made by Floyd D. Rose before he made the very first vertical fine tuning (FRT-4V) prototype.

In this interview with Eddie Van Halen, Eddie seems to be yelling at Mr. Rose for making a tremolo with fine tuners at the nut when Eddie wanted them to be on the bridge (as seen today).  Keep in mind, we are only getting Eddie’s side of the story, and Mr. Rose has his own story regarding the invention of fine tuners.  Below is an interview by Music Radar asking Eddie about the first Floyd Rose designs:

“Okay, this is a funny story – very true. Three tours in a row, every time we’d play Seattle – I can’t remember if it was ’79, ’80 and ’81 – it had to be ’79 because I never put it in the black and white guitar. So, in ’79, somebody goes ‘Hey, there’s a guy here named Floyd Rose and he wants to show you something’.“He comes in and goes [with cupped hands], ‘You wanna try this?’ [see FRT-1] and I say, ‘Sure, what the fuck, why not!?’ So I gave him one of my guitars and asked him to put it in because I didn’t know how to do it. It was different to the Fender tailpiece and it wasn’t a direct swap.

“So I tried it, once it was ready to go and… it was a pain in the ass! For one, the Allen screws on the neck were very small, and in order to torque it down you’d either strip the Allen key or the screw would strip. But more importantly, when you’re playing the guitar, things bend and they move and the neck shifts a little bit.

“Depending on the temperature of the gig from the beginning to the end, the temperature fluctuates. So between every, fucking, song I had to unclamp and tune! And then Dave and the rest of the guys would be going, ‘Is he ready yet?!’ It was just a pain in the ass. So first I told him, ‘Beef the thing up!’ because I kept snapping shit.

“So he comes back the next year with a beefed-up model. [see FRT-3] But there was still the problem of having to tune between every song, so I told him, ‘Put some fine-tuners on it. I played a little cello and violin when I was in elementary school and those instruments have finger adjustable fine-tuners. Okay?’ So that’s what I meant.

“Then the third year he comes along and goes [cupped hands] ‘I did it!’ and I go ‘No! You fucking numbnut!’ Because now you needed a wrench to fine-tune it! So now instead of three, you’ve got nine, you know? I’m going ‘No, you idiot, I meant fucking finger tuners! You’ve seen ’em before!’ Then he patents the fucking thing behind my back. Pissed me off… whatever!” 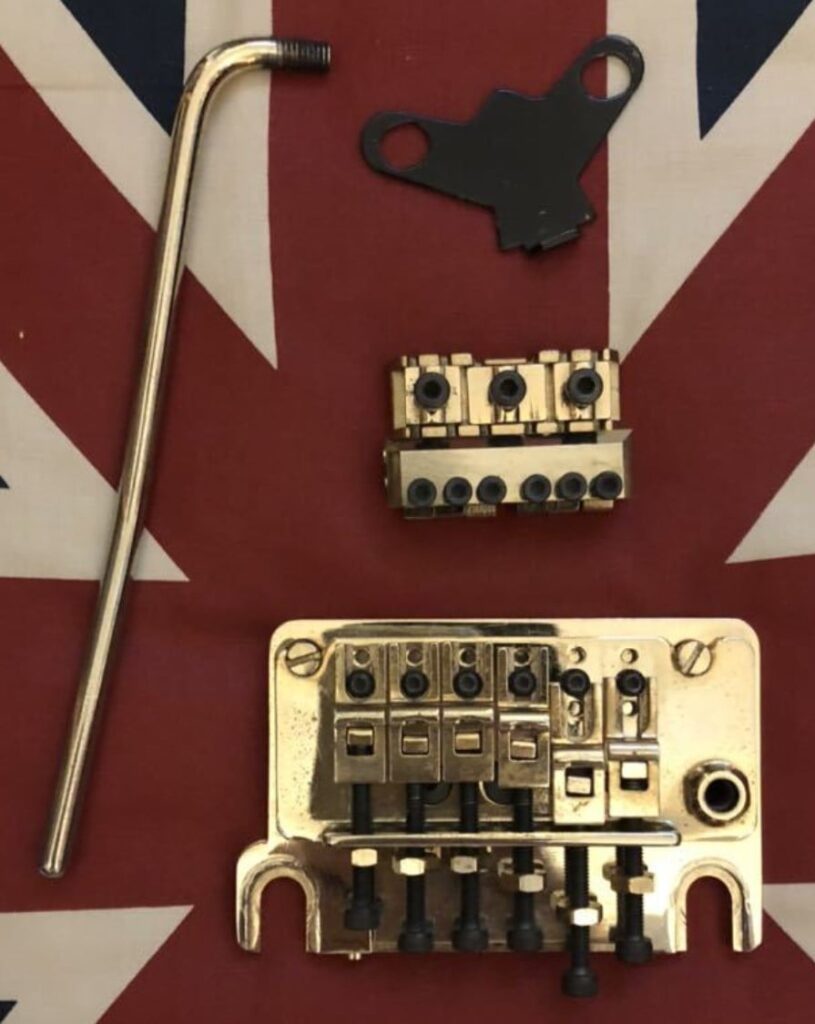 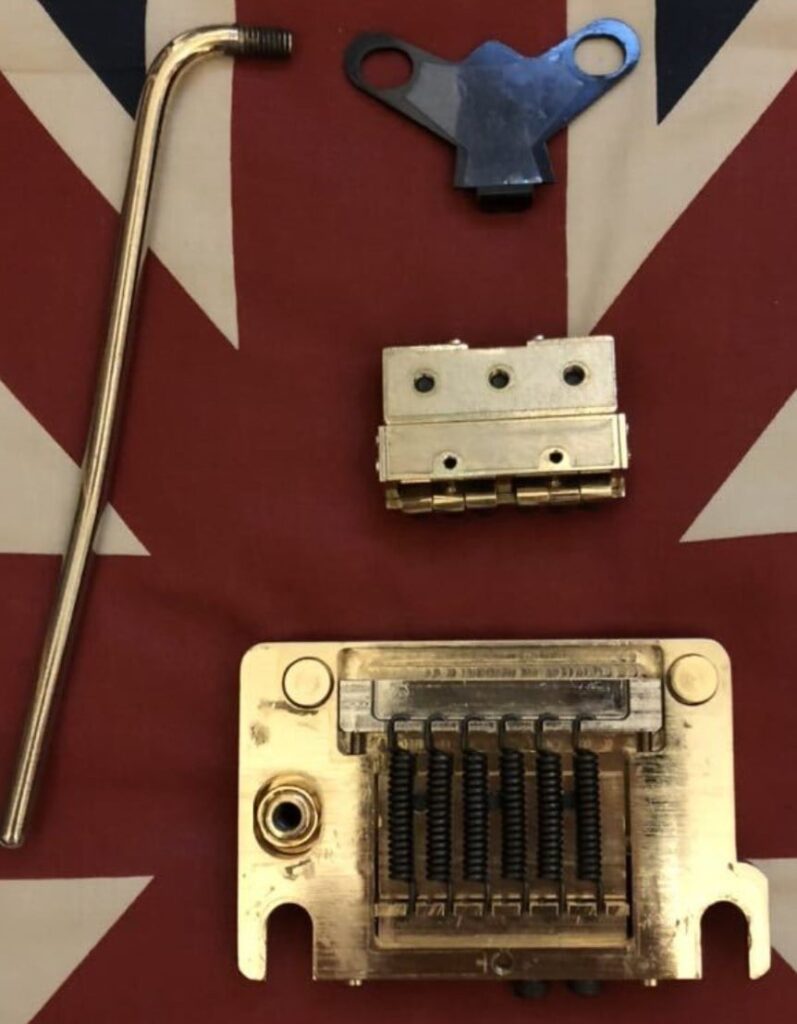 Eddie’s quote “So now instead of three, you’ve got nine, you know? I’m going ‘No, you idiot, I meant fucking finger tuners!” is referring to the six fine tuning bolts and three locking nut clamps (as similarly seen in the pictures above).  Of all the research done by early locking tremolo enthusiasts, the ESP Mighty Vise is the only tremolo which incorporates this design.  Is this a secret relic trying to hide from its past?  We may never know.

The ESP Mighty Vise has characteristics of the early FRT-3 and Les Paul Floyds, yet features the iconic fine tuners at the nut.

Floyd Rose, Kramer, and ESP all were highly connected at this point.  ESP made all the wooden Kramer guitar bodies/necks.  Kramer also had a contract with Floyd Rose to use and market the Floyd Rose tremolo semi-exclusively in the early 1980s.  Therefore, the ESP connection makes sense in why you may see this design.  ESP also made the very first FRT-5 design copy (ESP Magician as discussed later in article).  Again, this could be because the strong connection with Kramer and Floyd Rose.

The Fender Fine Tune Nut Lock featured similar characteristics and was put on some Fender guitars in 1983. 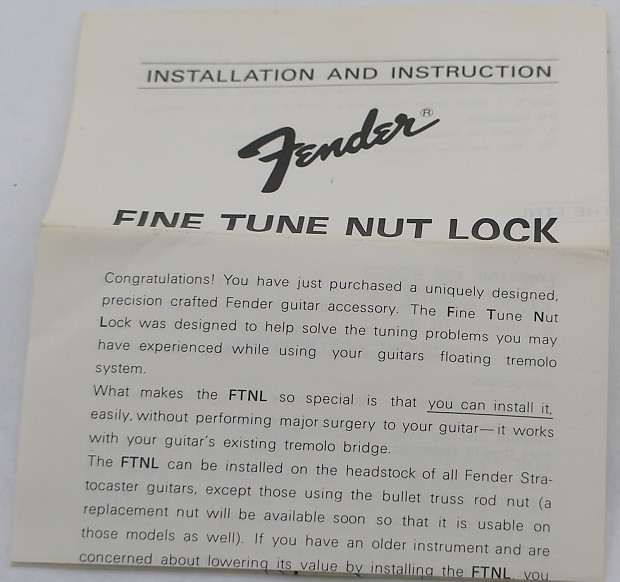 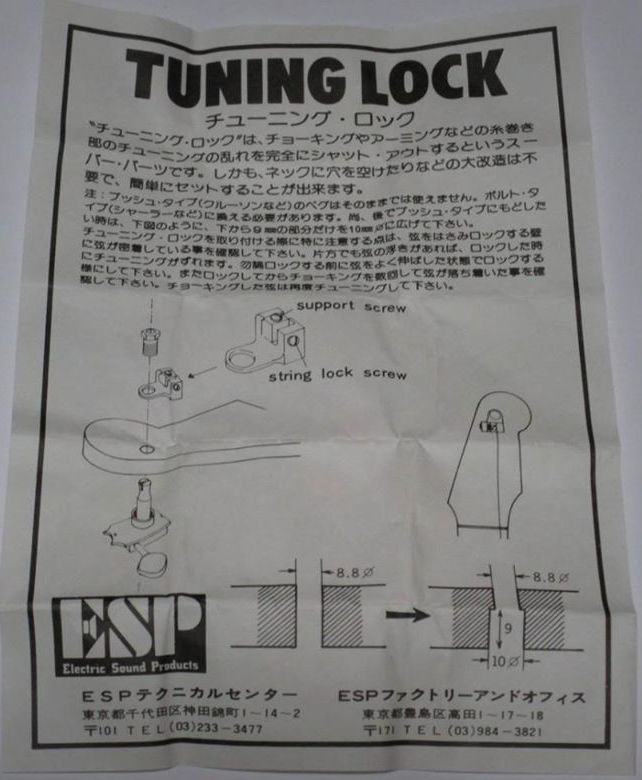 ESP also came out with their own locking tuners in 1983, possibly the first of its kind.    1983_ESP-Catalog