It seemed like Floyd Rose, for unknown reasons, discontinued his Fernandes Japan contract following his Kramer deal and instead contracted production to Schaller Germany (and the rest is history).

Fernandes, however,  having full experience making official Floyd roses models for the last 4 years, seemed determined make a very fine licensed tremolo.  And because of this, Fernandes arguably made one of the best licensed Floyd Rose units of the era. 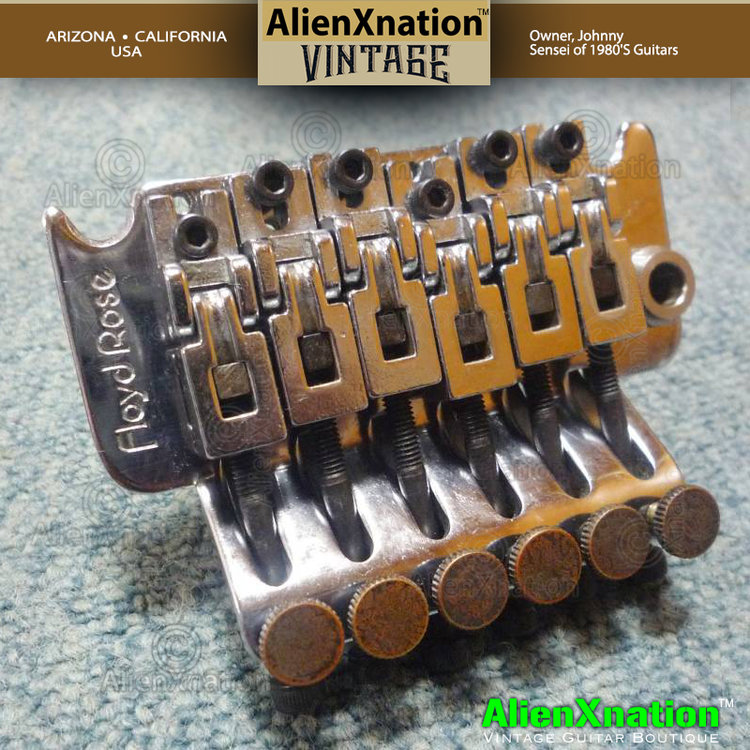 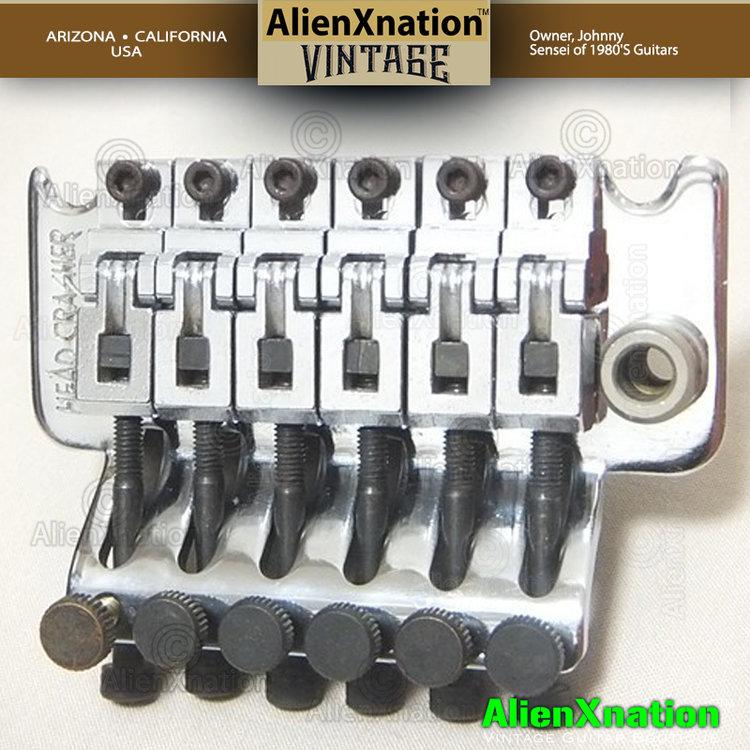 Fernandes essentially re-branded their Official Floyd Rose model of 1984/1985 (FRT-7) to the “Headcrasher” once the Floyd Rose contract ended (Please read the FRT-5 article to understand this transition in more detail).

There are multiple versions of the Headcrasher series, all of them being high quality with slightly different features as years went on.  The “FRT-7”  version above is technically the first version if we go in chronological order, but I will go by FRT-designation # to avoid confusion.

To make things extra confusing for you, Fernandes brought back the FRT-4 model name in 1987, which is nothing like the original vertical fine tuner official Floyd Rose FRT4 made in 1982-1983.  Instead, the “new” Headcrasher FRT4 is another FRT5 style whale tail design!  Can you see why there is confusion during these years? 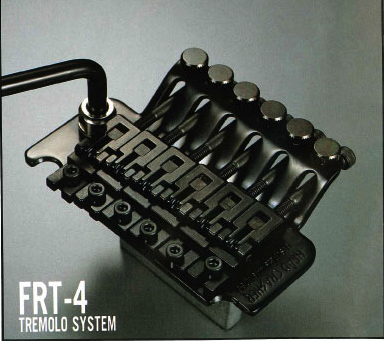 The Headcrasher FRT-4 above is from 1987 and had the standard whale tail design with the fine tuners in the “typical” position.  This version was only made for one year.  All FRT-4 models from 1987-1994 do not have the ability to adjust saddle height, and this is one descrepancy that separates it from the Headcrasher FRT5 and FRT7. 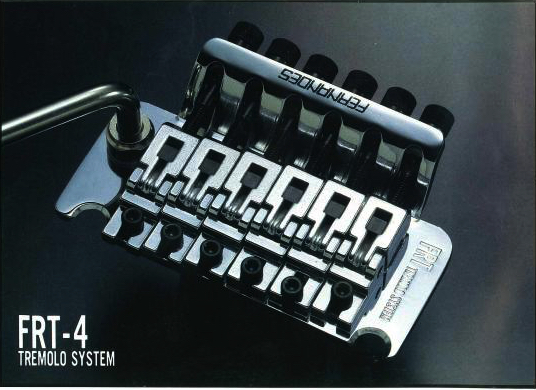 In 1988, the Headcrasher FRT4 was redesigned again, this time with the fine tuners completely out of the way and adjustable from horizontal position.  The “Headcrasher” logo also disappears and is replaced with “FRT tremolo system.”

This Headcrasher design, in my opinion, is the epitome of what all major artists wanted in 1982-1983. It solves two main problems that Floyd Rose encountered in early designs:  Fine tuners obstructing playing style and having the ability to actually fine tune.

In my opinion, if Fernandes Japan and Floyd mastered this design 1982-1983, I believe there is chance all modern Floyd models would be based off this version.  But of course, timing is everything.  This particular version lasted until 1994 (as seen below on the right).  In 1992 (left), the saddles were slightly redesigned and have a 45 degree angle cutting down on the back of the saddles.  Otherwise, it’s identical. 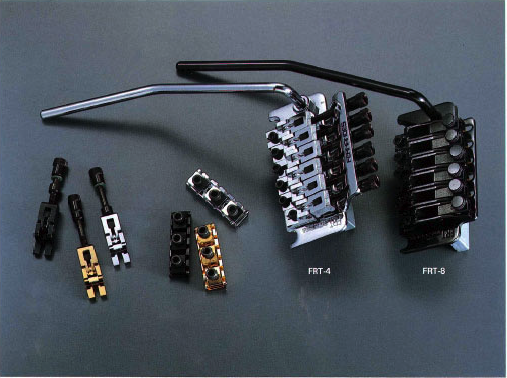 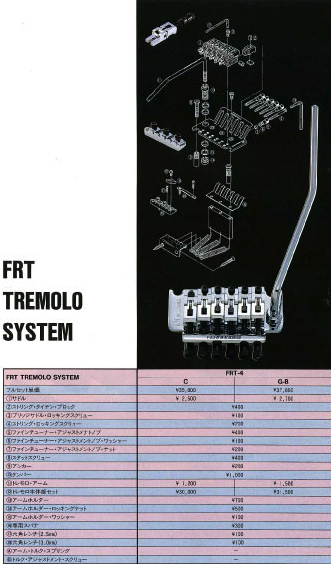 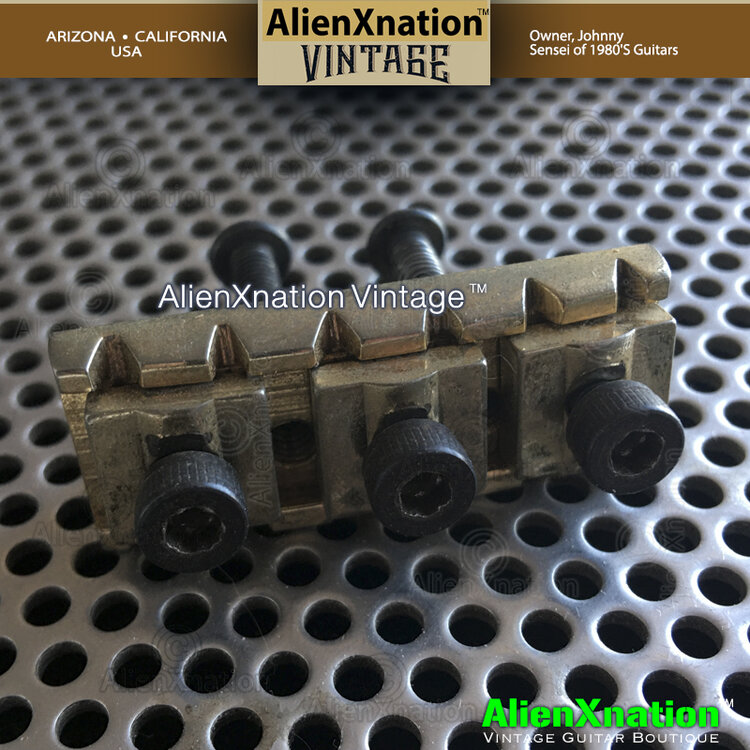 It’s also worth mentioning that Fernandes still kept the “humpback” locking nut design all the way until around 1992.  Schaller Germany versions do not have this design. 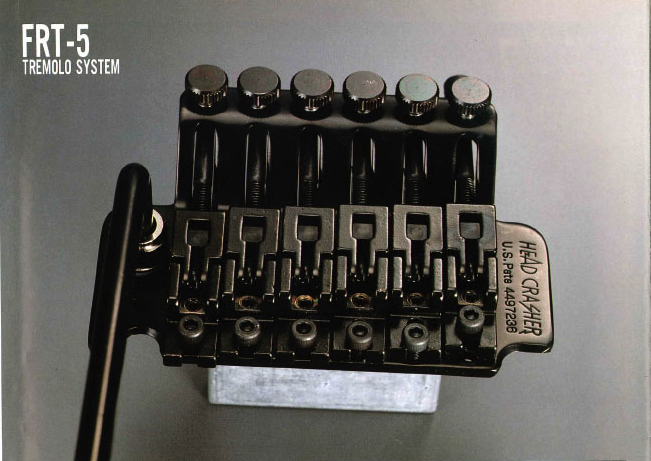 The “Headcrasher” FRT5 and 7 units were made of bent steel, had height saddles adjustment, and overall were very high quality.  And because of this, I believe them to be one of the best ever licensed Floyd Rose designs.

The first time you see the Headcrasher FRT-5 is in the 1987 Fernandes catalog.  However, I believe these started to be manufactured in around late 1985.  Notice the holes near the saddle bolts.  These are to raise the saddles if needed.  This is a great idea because you can match a guitar neck radius perfectly.  This is the only licensed model where I’ve seen this. 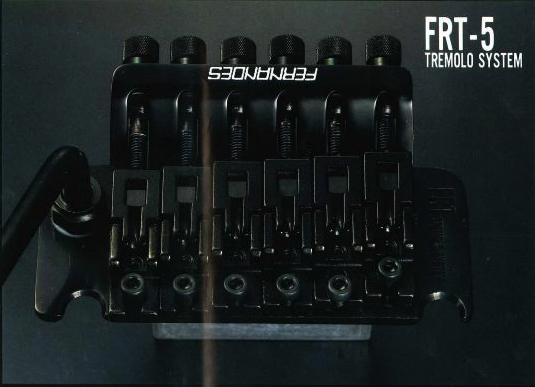 Like the 1988 FRT-4, Fernandes also changed the FRT-5 to have horizontal fine tuners.  The FRT-5 version, however, has the saddle height adjustments.

You see this version of the FRT-5 until 1992 (above).  It was then replaced the following year with the FRT-5 Pro, a low-profile version similar to the Floyd Rose Pro. 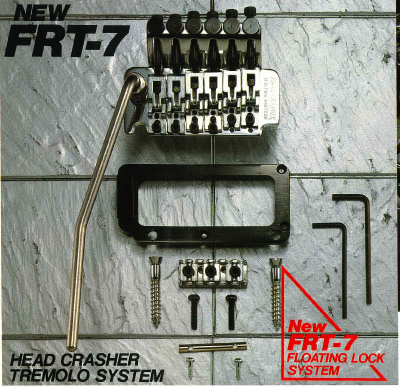 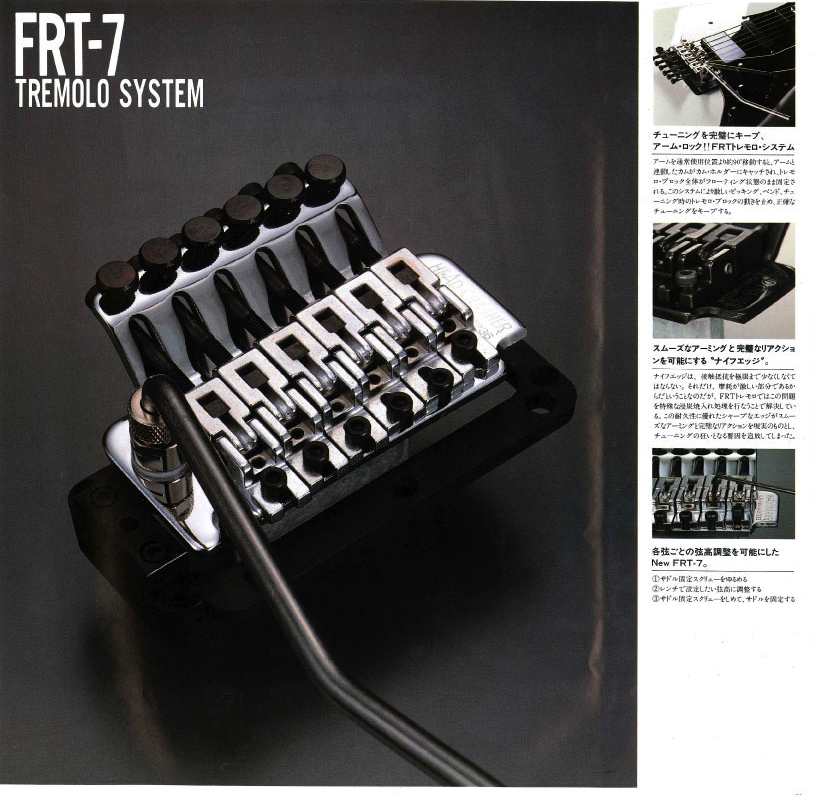 The whammy bar housing has a triangular device the moves sideways into the side area of the plastic device to prevent the tremolo from floating when needed.  This comes in handy when playing live or wanting to move from a floating to locked bridge in a matter of seconds.

Again, you can see that Fernandes what really trying to “one-up” every whale tail Floyd design after they lost the contract in 1984ish.  Their designers were really busy finding new ways to put extra features on their designs.

Like the Headcrasher FRT-5, this is one of the best licensed Floyd Roses of all time due to his high quality bent-steel construction and features.  The locking mechanism only lasted a few years however, probably due to the fact you had to bolt the mechanism to the guitar. 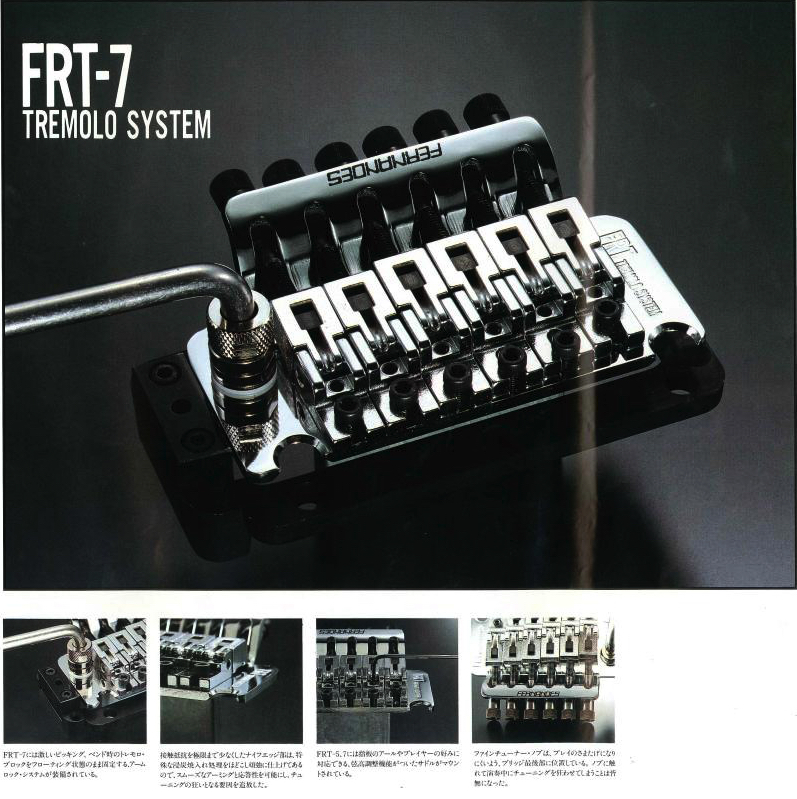 Like the 1988 FRT-4 and 5, the FRT-7 was redesigned to have the fine tuners in a fully horizontal position. 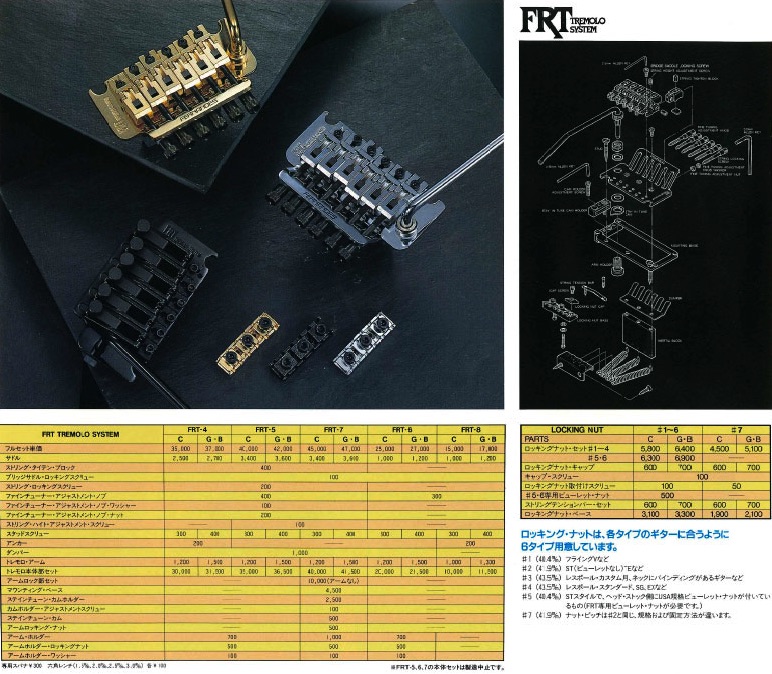 The last time you see the FRT-7 name designation is in the 1992 catalog with slightly different saddles.  It’s unknown how long the aluminum locking mechanism was associated with the FRT-7.

The Headcrasher FRT-6 was Fernandes string-through model that essentially replaced the FRT-2.  It’s also very similar to the Floyd Rose II and III, as shown below. 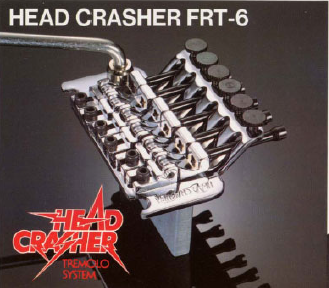 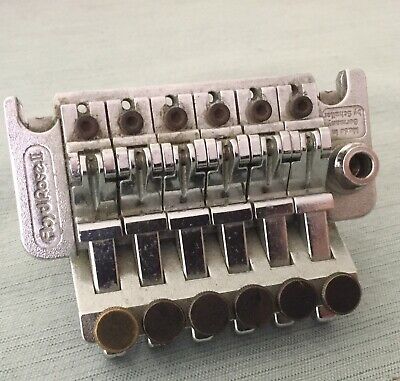 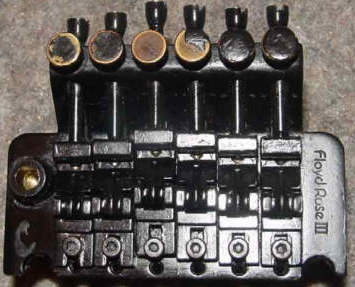 Floyd Rose III:  Supposedly made in Asia and put on overseas Kramer models.  This design is closer to the Headcrasher FRT-6. 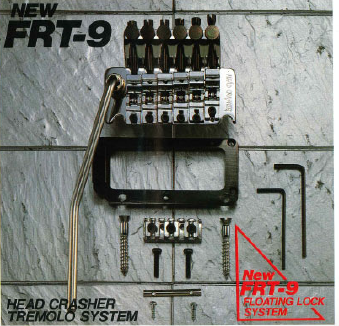 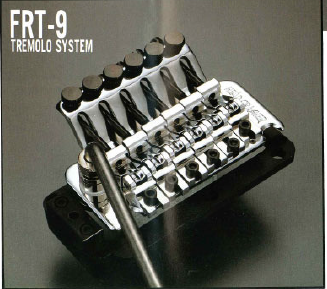 The FRT-9 (above) is simply an FRT-6 fitted with the aluminum locking mechanism which blocks the tremolo from moving.  This is the same feature on the Headcrasher FRT-7 (discussed earlier in this article).

The Body Crasher FRT-8 was the longest running Fernandes tremolo put on a variety of guitars from 1986-1996.  It’s a string-through model, although designed differently than the FRT-2 and FRT-6. 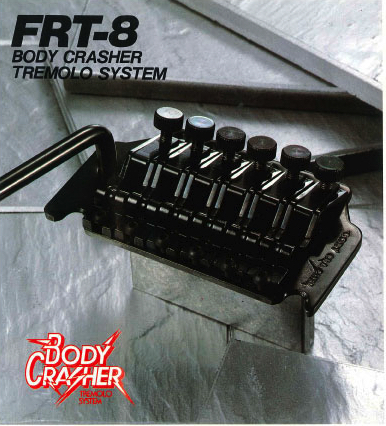 The FRT-8 first appeared in the 1986 Fernandes catalog (above). 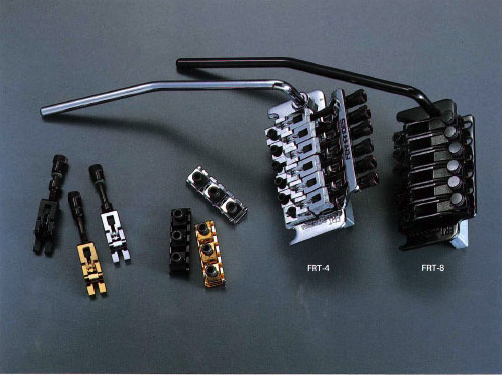 The FRT-8 is unchanged in the 1993 Fernandes catalog above. 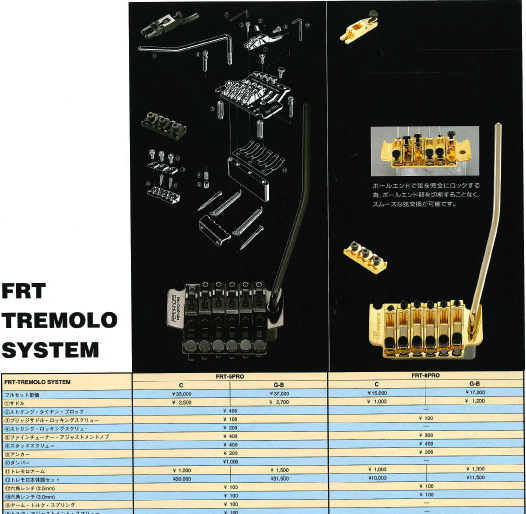 In 1997, Fernandes discontinued all prior models discussed and used the FRT-10, FRT-11, Schallers (ironically), and Wilkinsons. 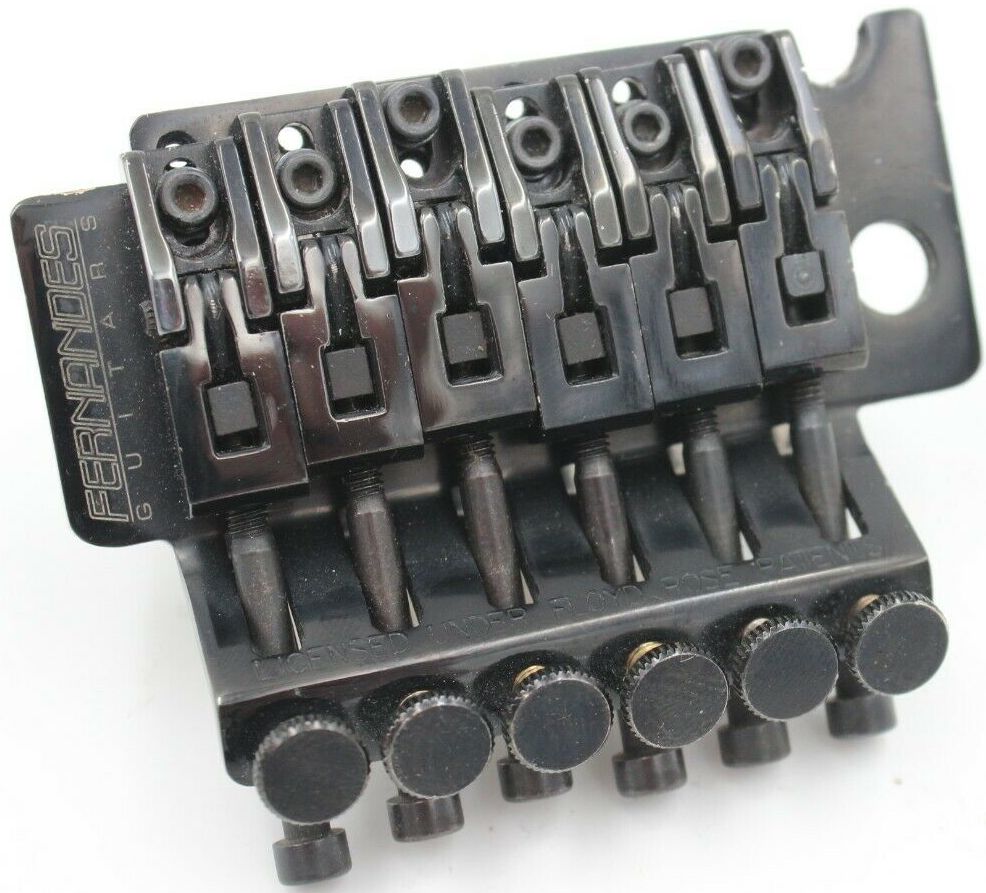 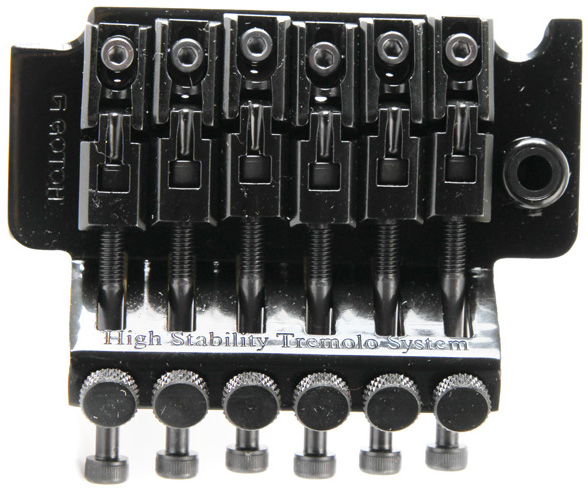 From 1997 to the end of the 2000s, Fernandes used a Fernandes-branded Gotoh on many of their models.  They called this their FRT-10, but I’ve also seen it called the FRT-11.  This model is nearly identical to the modern day Gotoh GE1996T, which I consider one of the best modern licensed Floyds you can buy new today.  Remember, Gotoh also has a mysterious past relating to early 80s Fernandes Floyd Rose prototypes and copies.  However, Fernandes wasn’t 100% exclusive to this tremolo. 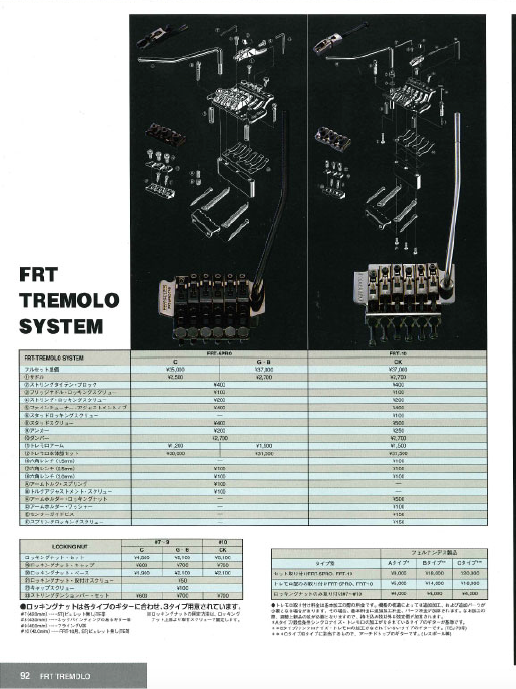 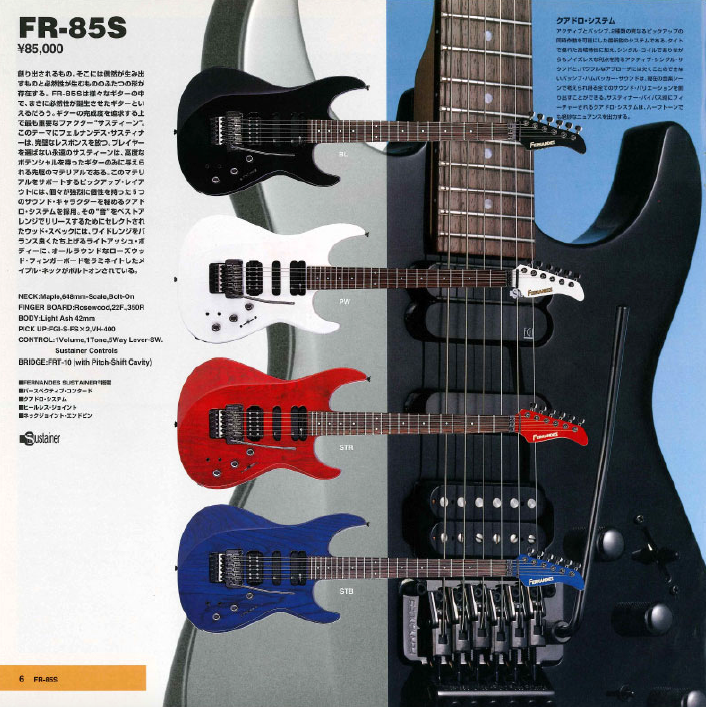 Here is a Fernandes FR Revolver series guitar with the FR-10 in the 1997 catalog. 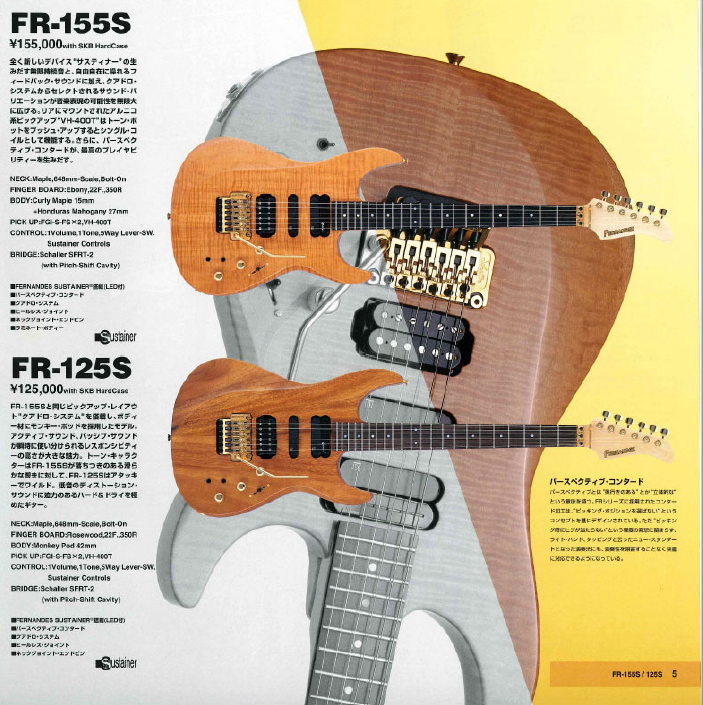 Ironically, Fernandes would also source out Schaller-branded licensed tremolos, as seen here in the ’97 catalog.  The Schaller tremolos would be seen on models up until the mid-2000s. 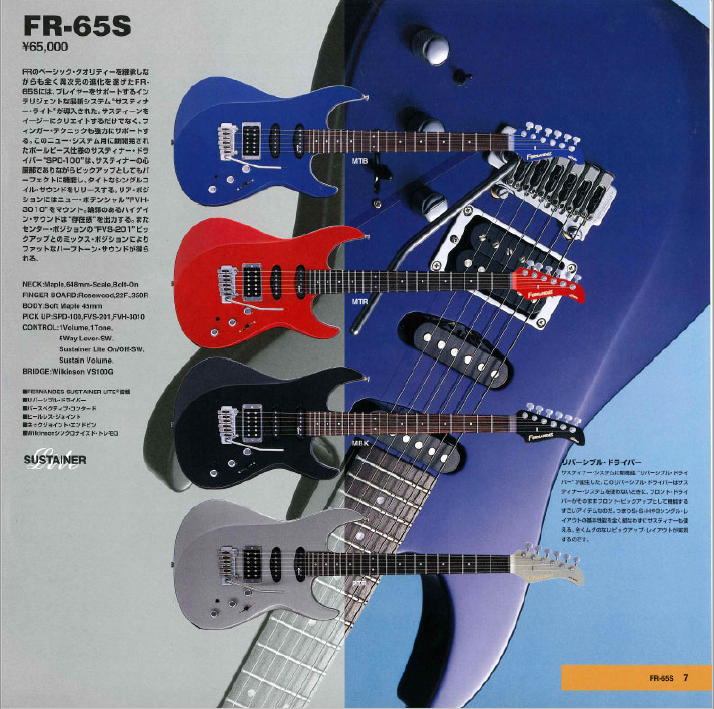 And lastly, they would also start using Wilkinson VS100 tremolos on certain models.